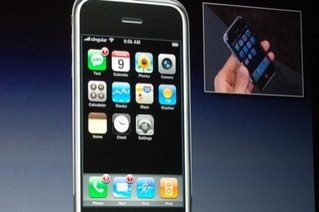 "We're going to use a pointing device that we're all born with," Jobs said. "It works like magic. ... It's far more accurate than any touch display ever shipped. It ignores unintended touches. It's super smart." 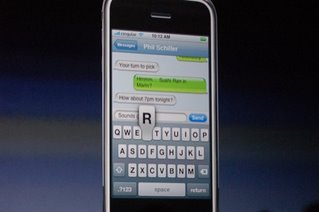 The phones, which will operate exclusively on AT&T Inc.'s Cingular wireless network, will start shipping in June. A 4-gigabyte model will cost $499, while an 8-gigabyte iPhone will be $599, Jobs said.

IPhone is less than a half-inch thin — less than almost any phone on the market today. It comes with a 2-megapixel digital camera built into the back, as well as a slot for headphones and a SIM card.

In a demonstration Tuesday, Jobs slid his finger across the display to reveal a home screen and then scrolled through a list of songs.

To make a call, users can tap out the number on an onscreen keypad or scroll through their contacts and dial with a single touch.

Apple is also introducing what it calls "visual voicemail," so users can jump to the most important messages rather than have to listen to all of them in order.

The phone supports Wi-Fi and Bluetooth wireless technology and can detect location from Global Positioning System satellites. It also can send and display e-mail and text messages.”

Why do guys love electronic stuff so much?????