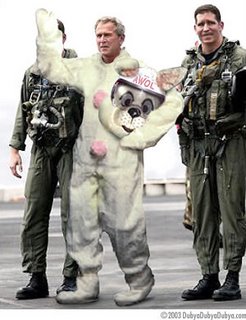 You know how Boy George always claims that he listens to the military as he masterminds the Iraq war? Oops - I guess that's now, as they say, inoperative.

His big speech tonight in which he will outline a "surge" of more troops in yet the latest "just one more try" desperation move in the clusterfuck that is his Iraq debacle isn't exactly being greeted with cheers by that military he claims to respect so much:

"Pentagon insiders say members of the Joint Chiefs of Staff have long opposed the increase in troops and are only grudgingly going along with the plan because they have been promised that the military escalation will be matched by renewed political and economic efforts in Iraq. Gen. John P. Abizaid, the outgoing head of Central Command, said less than two months ago that adding U.S. troops was not the answer for Iraq." 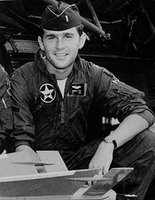 But, hey, what do those fusty old generals know about warfare? During the Vietnam War, when John Kerry was dodging bullets, George W. Bush served proudly and with distinction in the Texas Air National Guard and...oh wait, that's right, he got transfered to an even cushier post in the Alabama National Guard where he... oh wait, my bad, he didn't actually complete his service there either. But, you know, he did manage to avoid killing anyone. Well, ok, except for that crack whore in Birmingham after an all-night drunk, but, come on, accidents happen.
Posted by J at 3:21 PM

Its like he's just grasping at straws now trying everything and anything to salvage the mess over there.