Who are these people?

I'm sure I've asked that question before on this blog about various situations where my fellow man has annoyed the hell out of me (you know, like when I bitched about the people I invariably get stuck behind on the supermarket line who insist on using a credit card to pay for a damn carton of milk). But I ask again today after passing a Starbucks and seeing all these oh-so-serious people on their little laptops, busily typing away with a cup of double grande latte mocha proudly at their side.

This whole using-my-computer-at-Starbucks thing is a cliché at this point, I suppose, but it still goes on. And it's still annoying. And I still don't get it.

Why do you go to a chain store coffee shop to write on your computer?

I'm not sure if these are people who are so cheap they won't pay for Internet access at home so they go to Starbucks to use the free wi-fi there? Or do they perhaps just want to be seen writing the Great American Novel. Or do they want to feel like they're one of the “Friends” gang, hanging out at Central Perk, so they plant themselves at one of the window tables at the Bucks?

Either way, annoying as hell.

I went to Macy's today for some Xmas shopping. For myself, of course. (And I got a nice little score, by the way. Backstory: when I was in Vegas last week, my friend, and let's just christen her Malibu Barbie right now, dragged me into the Fashion Mall on Las Vegas Blvd. - because, you know, I really, really wanted to travel 2,200 miles to the gambling capital of the world to go shopping! - anyway, when we were there, I saw a wine bottle opener selling for $70. It looked pretty good and I came thisclose to buying it. But then the thought of schlepping it home seemed like a nightmare so I passed on it.

Good thing, because in the Daily News today, I saw the same opener on sale at Macy's for $19.99. With a 15%-off coupon, no less. Long story short, I ended up getting it for $16.99. I saved more than 50 bucks for the price of a 50 cents Daily News – and didn't have to deal with bringing that baby through security at the airport. 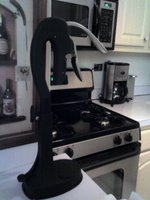 (Yes, that's it there – and you can see some of my fabulously renovated stainless steel kitchen in the background.)

Anyway, this is all a long way of noting that on my way to Macy's, heading to the 6 train, I passed that Starbucks at Lex and 87th and saw all the busy laptoppers inside. And they just were so busy and so annoying. And I really can't fathom wanting to use your computer in the middle of a crowded, noisy coffee shop.

So silly. But not much more silly than making sure everyone sees you writing on your computer at Starbucks, I guess.

Please, people, I beg you, just spring for the damn cable modem or DSL. Spare the rest of us your tortured or creative souls.

heehee but seriously the people who sit and stay in Starbucks are annoying everywhere!

But you know what - sometimes it's a nice place to be able to sit and check your email.

lol I dont think the people there even know what they look like! And this is the 2nd time I posted why does it happen when it takes so long to have a comment?