You know, there is a reason why people should get separate tabs when they're at bars.

Now usually I end up getting screwed with group bills, especially if there's a lot of people involved. There are always some folks who take advantage and gobble down a ton of food and multiple drinks, and then throw ten bucks into the pot and everyone else ends up having to make up the difference. I rarely eat a lot when I'm in a drinking mode at bars so I frequently end up paying more than I should.

However, I went out for drinks Wednesday night with my bud Jan Brady, and, um, well, I may - I'm not totally sure here - but I may have had a few more 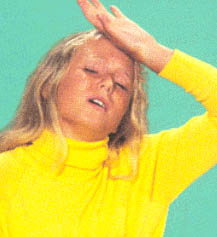 more drinks than her, then made her split the $50 tab right down the middle.

Although I will point out it's partly her own fault. She insists on being a vegetarian.

We went to Mica's on 3rd and we were each imbibing $4 apple martinis. We also ordered food (mostly at her insistence, I will quickly note). I had a chicken quesadilla, she had a veggie quesadilla – which for some bizarre reason cost 50 cents more than mine.

Then, when the bill came, they had conveniently listed the various items in chronological order of when we got them, so there were three martinis (for a total of $12), then the quesadillas at, respectively, $8.45 and $8.95, then three more martinis ($12). So it looked very even.

But as I reflect on it now, I may have had two of the first three drinks, then two more of the second three. Of course, as I pointed out at the time, her food cost more than mine.

So we each threw thirty bucks in, although she whined about how I no doubt had more to drink.

Ehh, I think I was mad at her about something anyway, so, you know, it's really only karma.

hah I hate when there's like 10 people at a table and then the bill comes and it's always a mess trying to figure out who had what!