My friend Sarah came over Monday night for a tasty Omaha burger, as only I can make, and a movie night.

She tried to get me to watch “City of Angels,” (“It's so sad!”) but I quickly put the kibosh on that. We settled on “Syriana,” which I enjoyed yet still have no freakin' clue as to what was going on. I basically took away from it that the oil industry and the CIA are evil - and I'm sure Bush and Cheney were probably somehow involved too.

But as we were flipping around looking for something, I noticed that “Flightplan” and “Red Eye” were playing opposite each 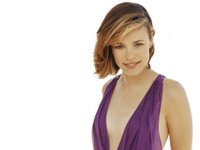 other simultaneously on two of the movie channels. (“Red Eye” with the always delicious Rachel McAdams – grrowwr, “Flight Plan” with Jodie Foster.)

I had already seen both so we didn't watch either, but noting them air simultaneously like that made me realize that - today - an airplane is clearly our new “scary place,” the ultimate movie setting for scaring an audience, when it used to be deserted creepy mansions or graveyards or the like.

Both films are from 2005, both claustrophobically set on long-haul flights, and both feature a woman in distress on a plane, each with the fear of the sudden death of a loved one.

(And the plots of both, of course, are also ridiculously implausible, but still intriguing).

So thanks to the asshole terrorists, airplanes are now the scariest place we can imagine. Fuckers.
Posted by J at 1:11 AM

I saw Red Eye too. That guy was so creepy in it yech.

I've always been nervous about flying but since 9-11 it's doubled so I agree that this is the new horror scene!