Rush "to the buffet" Limbaugh, the fat, drug-addled, sexually impotent hate-radio monger is, once again, making an ass of himself.

According to The Washington Post, Limbaugh got on the air and attacked Barack Obama after the Senator "confronted" Maureen Dowd for teasing him about his protuding ears in one of her New York Times columns:

FATASS: "If the guy's sensitive about his big ears, we need to give him a new name, like Dumbo. But that doesn't quite get it. How about Barack Obama Hussein Odumbo. Well, if he's sensitive -- stop to think about this. This is a man being lauded as the savior of the country, a presidential candidate ready to be an[n]ointed, and he can't handle being teased about his big ears? He goes out to Maureen Dowd and says, I am putting you on notice? Is that a threat? I want to put you on notice? Can you imagine, like I said yesterday, let's say something about me -- I'm very sensitive about whatever it is, X, and the papers write about it and make fun of it. Can you imagine if I sought out Maureen Dowd or anybody and said, 'You know, I'm going to put you on notice. I've been teased about that ever since I was a kid, and I don't like it.' That would be the whole column the next day about how thin-skinned I am, how I can't take it, this and that, and I am a complainer and a whiner and I was trying to influence objective journalists and so forth. But instead, Mo Do says, 'We're just trying to toughen you up.' "

As Howie Kurtz notes in his Post column, Obama was clearly joking with Dowd, but Limbaugh tries to make it a serious character flaw. 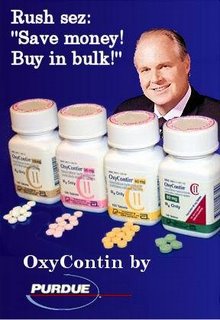 If only there was something about Limbaugh to make fun of. Somthing about this grossly obese blob, who hasn't eaten a salad since the Nixon administration. This fat fucktard who has been busted more than once for possessing illegal drugs, including sending his poor maid out to score Oxycontin. Who got caught coming back from the Dominican Republic with Viagra, the drug for men who can't get erections. The clown who has been married and divorced three times. The genius who probably helped lose the Senate for his right-wing Republican buddies after he mocked Michael J. Fox's Parkinson's symptoms when he was campaigning in Missouri for stem cell research.

Ah well, if there was only something to tease him about at least he wouldn't complain like that wimp Obama.
Posted by J at 11:54 AM

yeah its too bad theres nothing to make fun of him about! :)