It's hinted at in this Washington Post article about Rudy Giuliani's dream of becoming president, but as I said in this prescient post, he has NO chance of getting the Republican nomination.

Rudy is one of the few Republicans I could vote for, which tells you all you need to know about his chances of getting elected by Billy Bob and his wife and sister Ellie Mae in East Bumfuck, Alabammy. 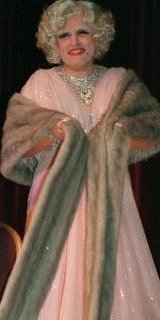 The polls look good for him right now, but that's partly name recognition and mostly because the majority of Republicans out there don't know his positions on the hot-button social issues, stances he needed to take to get elected mayor in NYC in the first place, and stances that come naturally to him, anyway, as a Republican in Name Only (RINO).

I think deep down he realizes all this himself, but his ego, not to mention the flattering media attention and the boost a presidential flirtation would give his already very lucrative speaking fee, are probably too hard to resist.

But as soon as he seriously runs, it will be a matter of seconds before one of his right-wing opponents circulates those pictures of Rudy in a dress, and tells the heart-warming tale of him staying with a gay couple on the Upper East Side after his wife threw him out of Gracie Mansion during his last messy divorce. Then the fun begins.
Posted by J at 10:48 AM