President Bush today said Al Qaeda was to blame for the rising wave of sectarian violence in Iraq, which he refused to label a civil war. Mr. Bush said he would press Iraq’s prime minister during meetings in Jordan later this week to lay out a strategy for restoring order.
- NY Times 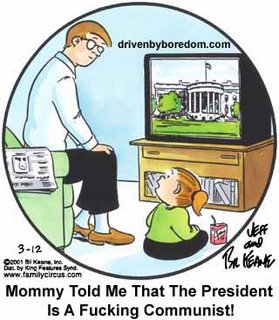 Listening to this guy talk about the debacle he's caused in Iraq, and his self-denial, is fascinating. He reminds me of that cloying comic strip, Family Circus. You know, with all the cute little kids saying cute little funny things (unfortunately never as funny as this parody).

One of the strip's recurring themes (besides the always popular dotted line tracing Billy's convoluted path on his way to school) shows the kids standing in front of a smashed vase or lamp or something and the parents looking angrily at them, and the kids saying "Not me," with a sort of ghostly image labeled Not Me hovering around (in case you don't get it).

Well that's Bush's way of explaining away the problem in Iraq. Not Me.

But of course it is him. It was his ultimate decision to invade Iraq and depose Saddam, and now that country is disintegrating. Civil war has broken out, hundreds are killed every day, civil society is ceasing to function, Iran is getting stronger. And, of course, almost 3,000 U.S. troops have been killed with tens of thousands more maimed.

The American public has soured on the war, and we are eventually going to pull out (even if it won't happen until Bush leaves office - which of course means tens of thousands more Iraqis and thousands more Americans will be killed in the interim), and then the country will really turn into a clusterfuck.

Amazing. We invade a nation, destroy a functioning government (and yes, yes, stipulate Saddam was a nasty guy), bring worsening chaos, and then will get the hell out with the people left living in absolute fear, with less clean water and electricity than before the invasion, unable to go to work or school, and not knowing if they or their family are going to survive the day. 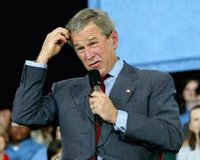 What a disaster! It's so sad when you see them crying on TV after another explosion.

Bush got a slap in the face today and had a meeting canceled with the leader of Iraq. He has made the presidency a joke around the world now!