The real face of the GOP

If you ever had any doubts about the racial undertones of the Republican party, they should be put to rest with the news out of Washington that Sen. Trent Lott (R-Miss) has been elected to the number two spot among the Senate GOP caucus and is back in his party's leadership.

Lott, you may recall, had to step down as Senate Majority Leader four years ago (during those horrible days when the GOP had the majority) after he spoke approvingly of fellow southern senator Strom Thurmond's presidential run as a strict segragationist. 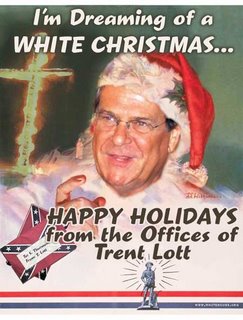 Thurmond, of course, had been a Democrat for many years, but when the Democrats started changing in the 1940s and 50, and became supportive of civil rights, he, like many good ol' boy Southern bigots, became a Republican, which then became the party of the South. But before he did that he became a "Dixiecrat," and made a futile run for the presidency in 1948.

Lott set off the firestorm, which has apparently cooled, when he said the country would have been better off if Thurmond's hateful ways had been the policy of the land. Ugh.

The Republicans were shamed into forcing him to step down as majority leader, but now he's weaseled his way back into the leadership.

For years, the GOP has been saying the characterization of it as the party of racism and bigotry is wrong and exaggerated. But now here it is putting a clear bigot back into a position of power.

Not to mention, one of its just ousted senators, George Allen of Virginia, proudly portrays himself as a good ol' boy. He kept a noose in his office for years, and, of course, his bid for re-election was derailed when he was caught on tape calling a young campaign worker of his opponent "macacca," a racial slur.

But this is the party that's changed so much, they tell us.

Sure it has. And say hello to Trent Lott, the new number two man in the Senate Republicans. Thankfully, and ironically, now the minority party.
Posted by J at 12:03 PM

And don't forget the senate race this yr in Tenn. and the disgusting racist ads the Republicans ran against Harold Ford.