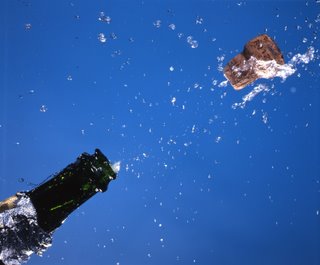 That was the happy sound of the bottle (3 bottles actually) of bubbly being popped at an election party I went to. Yes, someone is more of a political junky than I am, and actually had a viewing party. Nerd.

The Dems, of course, took the House, and, at this point (about 3 am) before I hit the sack, also look in pretty good shape in the Senate. Virginia and Montana are still up in the air right now, with each doable for the Democratic candidates.

And thank you New Jerseyites for coming through in the Senate race there. (I can go back to Bar A on the Jersey shore come summer - whew). If the Dems do take the Senate, it bodes well for future potential Supreme Court appointments. God forbid Bush gets a chance to name another justice, they can at least work to keep him from putting another right-wing nutjob on the bench.

All in all, Tuesday was a pretty good slapback by the American people to the radical right who have been running this country for the last several years. Not that George W. Bush will go out of his way to respond to the clear message. He's a dick who thinks being stubborn is somehow a sign of leadership. But, at least with control of the House and potentially the Senate, there will be some modifying force on his actions.

And my devious plan of being consistently pessimistic about the election results worked, as I can go to bed pleasantly happy and not disappointed.
Posted by J at 3:29 AM