March of the morons 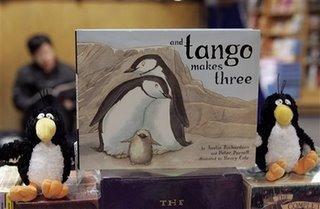 If you ever needed a reminder about how bizarre the right-wing mentality is, consider this AP story:

SHILOH, Ill. - A picture book about two male penguins raising a baby penguin is getting a chilly reception among some parents who worry about the book's availability to children — and the reluctance of school administrators to restrict access to it.

The concerns are the latest involving "And Tango Makes Three," the illustrated children's book based on a true story of two male penguins in New York City's Central Park Zoo that adopted a fertilized egg and raised the chick as their own.

Complaining about the book's homosexual undertones, some parents of Shiloh Elementary School students believe the book — available to be checked out of the school's library in this 11,000-resident town 20 miles east of St. Louis — tackles topics their children aren't ready to handle.

These hillbillies aren't complaining about some fictional story that they see as somehow trying to indoctrinate their kids into the – gasp – gay lifestyle. They are outraged about a book depicting a fairly well-known real news story, in which Roy and Silo, two male penguins in the Central Park Zoo, were devoted to each other and then basically adopted and raised a chicklet together.

You know, it's one thing when these nutjobs get all riled about the Harry Potter books because they believe they promote “witchcraft.” Most people laugh at them when they go through that little song and dance.

But when they actually try to censor a story about a real-life event it's borderline obscene.

Perhaps part of their fear is that the story somewhat puts the lie to their theory that homosexuality is a choice that only decadent humans make. (Because, of course, so many people willfully will choose to be part of a much hated and discriminated minority).

It also makes me wonder how many of these rightwingers are living a closeted lifestyle. If they fear that the least little bit of provocation can turn their kids gay, what is going on in their own sick little minds? How easy would it be for them to make the jump?

How many Mark Foleys and Ted Haggards are out there in rightwing, red state America? I think more than we can imagine.
Posted by J at 1:47 AM

These are scared and not very smart people who feel that anything they don't understand is going to "get" them and their kids. There's a lot of them out there.

Not to be a snob but I am SO glad I don't live in a place like that with so much narrow mindedness.

lwt - not to be a snob but you are a snob when you look at those who have different views as yours and look down on them.

I feel sorry for those kids having to be brought up by bigots like that.

No sorry Marcus, I think it's perfectly appropriate to "look down" on people who are bigots and hatemongers and work to demonize others. In fact, I think it's required. One of the few things we can do as a society is show moral condemnation to those who believe in hate. Why should we pretend they simply have different views when they are actively working to divide us as a nation and indoctrinate their kids with hate and make a group of people subhuman. Do we say the Nazis just had "different" views? So you're damn right I look down on them.