It looks like Boy George is as unpopular in the rest of the world as he is here.

A meeting he had scheduled with the Prime Minister of Iraq and King of Jordan was abruptly canceled, as the leaders realize Bush is poison these days, incredibly unpopular with their people.

When he arrived in Jordan, he was greeted with masses of protesters on the street. In fact, any time he travels he is isolated in a protective bubble, far more than any previous U.S. President has been, because he is so despised. 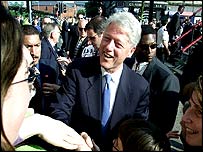 He never gets a chance to walk among average people in a country he is visiting. Compare that to Bill Clinton, who was beloved around the world (remember that amazing scene of him being enveloped in a loving crowd in Dublin)?

The way things are going now, the only people Bush remains popular with is a rapidly dwindling group of red state right-wingers and perhaps the anti-abortion crowd.

Speaking of Clinton, his foundation, which has already raised billions to combat poverty, AIDS and global warming, just announced a deal it has brokered to provide AIDS medicine for impoverished Third World kids.

You know, that's that evil Bill Clinton, the guy the Republicans impeached because he got a bob job.

But, hey, I'm sure when Bush is out of office, he will do much good work too. 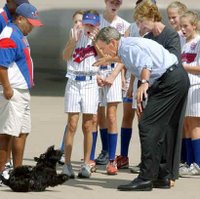 Well, he still has his dog Barney on his side. Oh, wait, that's right. He can't even hold the poor little thing correctly. Bush dropped it on its back once. (Check out the look of horror on the kids' faces). Fucking idiot.
Posted by J at 11:06 AM

I feel sorry for the dog and his kids who I think are embarassed by him.