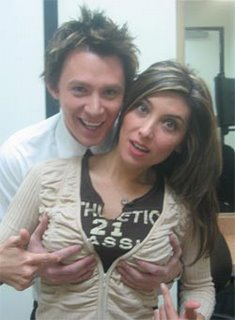 I've been doing this blog for almost a year now (oy) and I've discovered there are two hot button issues that almost invariably garner passionate responses: abortion and Clay Aiken.

Abortion, I think we can all understand. It's such a volatile, sensitive topic, and just about everyone has a strong opinion on it, not to mention usually thinks the other side is very wrong.

In the hundreds of posts I've written, I think I've made only two that have included a brief mention of the “American Idol” favorite (one was just last night, the Gawker video of the "hand incident" with Kelly Ripa) and, I swear, each time, almost within minutes of them going up online, I got angry comments from Clay fans – who, frankly, I doubt read Too Saucy on a regular basis.

They apparently have some sort of web-crawling search engine set up, a special Google or Technorati blog monitoring thingy, that seeks out Clay Aiken mentions. And if they are in any way less than worshipful, they immediately write in to defend their hero. It's really quite fascinating.

If only they would use their evil powers for good.

But now leave me alone and go back to knitting colorful scarves for Clay. Or doodling your initials intertwined with his in your notebook. Thank you.

And don't you forget it! lol

hehe his fans are lunatics! They call themselves part of Clay Nation!