When you care enough to give the very cheesiest 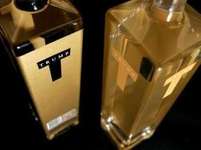 I went out to dinner with my bud Sarah on Friday night. (She's the only person, by the way, who insists I use her real name on this blog. It's almost as if she doesn't trust my ability to come up with good nicknames. But Velma and Corky can attest I do!)

She's also one of the few girls I know who can drink me under the table. And when we went out for cocktails after dinner, she noticed the bar had Trump Vodka. Yes, Donald Trump, real estate mogul, reality show host, and basically somewhat weird guy, has his name on a bottle of vodka now. And, hey, nothing says class like Trump Vodka.

So she insisted on getting a couple of shots for us. And, I have to grudgingly admit, it wasn't bad. The ironic thing is, Trump doesn't even drink, and says he has never tasted "his" vodka. It's a licensing deal, of course, where one of the big booze companies pays for the use of his name.

Because, you know, having a vodka named after a rich guy with a bad hairpiece who speaks in a weird monotone and whose biggest contribution to American culture is saying “You're fired!” on a freakin' reality show, um, makes you want to drink it?

And this is why I'm not in marketing or consumer goods. I just don't get it.
Posted by J at 5:16 PM

Well people see Trump as somehow being the embodiment of wealth and power so a lot of people believe it or not admire him and want to be like him. He is one of the few people known across middle America for being rich, even if they don't really know his story they know him. So I can totally see a company wanting to tap into his name.

haha I DONT like that nickname! (And I can also drink you undere the table - almost:)

I wouldnt order it just out of principle. I think Trump's disgustuing!

lol that vodka was good and even you had to admit it! But yeah I wouldn't buy a bottle of it because I don't want any of my $$ going to Donald Trump eww. It's bad enough having to see his tacky building on 5th Ave every day when I go to work.