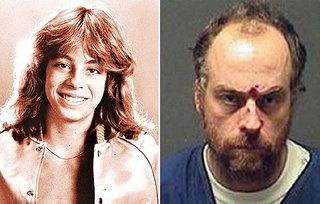 I've been a tad busy lately so didn't have time to mention a primo C-level (maybe even D-level) celebrity sighting I enjoyed a few nights ago.

On Thursday, I was at a media party at PM, down in the ever-trendy meatpacking district, and Leif Garrett was there. Let's just say it was mugshot Leif, not teen idol Leif. Oy. And the amazing thing is, girls were still clamoring to talk to him. What is wrong with you people?

Meanwhile, I really shouldn't talk about wrongess, after one of my more obnoxious comments that night. But, in my defense, I will say I immediately heard how ridiculous it sounded, and, at least, felt a modicum of guilt.

So, here I am, at this pretty cool party - open bar, hot waitresses bringing around yummy Hors d'Oeuvres - and I actually complained to a friend that the crabcakes were cold.

You know, the free crabcakes being served with the free booze. And I managed to bitch about them.

We do get jaded sometimes. But I'm working on it. And at least I recognize my wrongness. Thank you.
Posted by J at 4:49 PM

My sister used to have his posters on her wall when he was a singer. He was cute I guess.