Rush takes a break from popping pills and vacuuming down food just long enough to mock a man with a debilitating disease.

A few days ago, I noted and linked to a powerful TV ad Michael J. Fox taped for the Democratic senate candidate in Missouri, Claire McCaskill. In it, the actor, visibly suffering from the Parkinson's Disease he has had for several years now, points out that her opponent, the Republican senator in that election, is opposed to stem cell research, which many believe can greatly help in finding cures for afflictions like his.

(He's also done one for the Maryland senate race, where, again, the Democrat is for stem cell research and the Republican, pandering to the religious right as usual, is opposed to it.)

I said then that the ad is tough to watch, but very moving. Apparently the right-wingers agree as they are now going after Fox.

Rush Limbaugh has stopped gobbling pills long enough to snarl that Fox is "acting" and just playing up those Parkinson's trembles for sympathy.

"Possibly worse than making fun of someone's disability is saying that it's imaginary. That is not to mock someone's body, but to challenge a person's guts, integrity, sanity.

To Rush Limbaugh on Monday, Michael J. Fox looked like a faker. The actor, who suffers from Parkinson's disease, has done a series of political ads supporting candidates who favor stem cell research, including Maryland Democrat Ben Cardin, who is running against Republican Michael Steele for the Senate seat being vacated by Paul Sarbanes.

"He is exaggerating the effects of the disease," Limbaugh told listeners. "He's moving all around and shaking and it's purely an act. . . . This is really shameless of Michael J. Fox. Either he didn't take his medication or he's acting."

Normally, the best thing to do with a thug like Limbaugh is ignore him. This is a clown of a man, after all, who has been married and divorced three times, was busted for sending his maid out to score illegal pills for him, and, most recently, was busted again, this time coming back from the Dominican Republic with a bottle of Viagra that wasn't prescribed to him. (As I noted when that story came out, why is a single man bringing Viagra on a vacation? These holy rollers don't believe in sex outside of marriage. Not to mention, the Dominican Republic is infamous for being a place where predators go for easily obtained underage sex. Hmm. Just a coinky dink, I'm sure, that Limbaugh was scoffing at the Mark Foley Congressional page scandal a few weeks ago).

The hyopcrisy of these holier-than-thou right-wingers, of course, is legendary. This fat fuck, along with then-Speaker Newt Gingrich, were the guys who lambasted Bill Clinton's morality on a daily basis during the Monica Lewinski crap, while they themselves were in the middle of multiple marriages, divorces, and assorted cheating on their spouses. (Although Newt is still only on wife number three. She might be a keeper.)

Well, in a perfect world, the best thing would be to ignore him. But, sadly, the Republicans in power treat the radio host as a serious man. When Dick Cheney or other administration figures get in trouble they go running to the gargantuan cocksucker for a comforting, softball interview on his show.

Al Franken wrote a great book a few years ago, "Rush Limbaugh is a Big Fat Idiot." With that title, he was mocking the 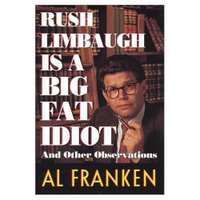 shelfloads of right-wing tomes out by skunks like Ann Coulter, who regularly call Democrats "Godless" or "Treasonous."

It's a funny title. And, once again, Limbaugh has proven it's also true.

Here's that Michael J. Fox ad again, by the way.

What a pig. I can't believe people still listen to Rush Limbaugh?

Poor Michael J Fox looks so sick in that ad. I hope they vote for his candidate to get stem cells research!