“Kazakhstan is more civilized now. Women can now travel on inside of bus, and homosexuals no longer have to wear blue hat.” 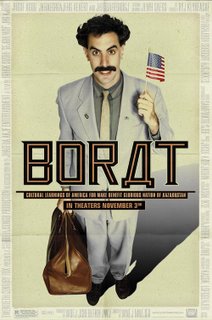 Since I was inexplicably offering reviews lately (on Showtime's “Dexter” and some Texas R&B), I thought I would remind you that one of the funniest movies of the year opens on Friday, “Borat: Cultural Learnings of America for Make Benefit Glorious Nation of Kazakhstan.”

I went to a screening of Borat tonight, and, seriously, haven't laughed as hard at a movie in a long time.

He, of course, is Borat Sagdiyev, “Kazakhstan's sixth most famous man,” a hapless Kazakhstan “journalist,” as played by British comedian Sacha Baron Cohen, who is probably best known to U.S. audiences as Ali G., the dimwitted Cockney wigger of Da Ali G Show, originally created for the UK's Channel 4, and airing here on HBO. Borat was one of his other minor characters on that program (along with Bruno, a very gay Austrian TV host) and, like Ali G, each would get unsuspecting patsies to go along with their outrageous actions and proclamations in the guise of shooting a segment for their TV “interviews.”

Granted, you may have to be cursed with a very twisted sense of humor, but there is something absolutely fascinating about seeing “Borat” lead a bunch of good ol' boy red staters in singing along with him to an anti-Semitic song, and watching how easily and comfortably they slip right into his obnoxious lyrics.

Even funnier, the government of Kazakhstan is outraged at Cohen's character, terrified that people will think he is real and their country would produce someone who would say, “In Kazakhstan we have many hobbies: disco dancing, archery, rape, and table tennis.” They've been protesting the upcoming movie, guaranteeing, of course, even more publicity for it.

Anyway, if the upcoming elections have you in a state of nervous tension, as they do me, I'd recommend you go see Borat for a brief escape.

(And, in a little showbiz aside for some too saucy readers who I know love this type of stuff, Sacha Cohen's real life fiance is Isla Fisher, the quite tiny and quite adorable actress who played the nympho little sister who jacked Vince Vaughn off under the dinner table in "Wedding Crashers.")
Posted by J at 10:27 PM

Ali G is hilarious. I saw him once with Andy Rooney who got all pissed at his questions and walked off the interview.

Do those people really not know they are being spoofed? It's hard to believe because he is so over the top.