Why doesn't she just start her career at Fox News now? 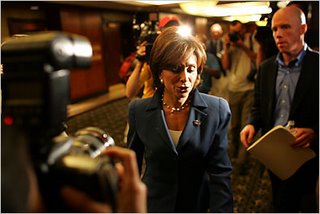 Stick a fork in her. She's toast.

The one competitive statewide race in New York this year, the contest for attorney general, is basically over now.

As I noted in a previous post, with Eliot Spitzer, and Hillary Clinton expected to crush their Republican opponents in the races for Governor and Senator respectively, the only contest that was even halfway competitive was for state Attorney General. Although Andrew Cuomo was probably going to win, Jeanine Pirro, the former Westchester County DA, was enough of a name, and had some high visibility prosecutions under her belt, to, at least, give him a serious run.

But now we find that Jeanine is - ooops - under investigation herself by federal prosecutors, for allegedly trying to bug her husband's boat to catch him in the act with his mistress.

Not only that, but she went to disgraced former NYC Police Commissioner, Bernie Kerik, of all people, for help in trying to do it. And this was AFTER he had been forced to withdraw as head of Homeland Security after all sorts of financial shenanigans.

In a profanity-laden transcript of her phone calls to Kerik, who was being bugged himself by the FBI in their investigation of him (how much fun is this?) she was also heard belittling the AG job she now seeks as a "been there, done that kind of thing," according to WNBC-TV, which broke the story yesterday.

At a tearful press conference, after the channel 4 broadcast, she vowed to remain in the race, and the GOP says it's sticking with her, but the writing is on the wall. Rudy Giuliani, in fact, has already canceled a planned fund-raiser for her.

So it looks like Dems are going to hold all NYS's major political spots - Governor, AG, and both Senators - for the first time in decades, and, once again, the state's Republican party is self-destructing.

I just wish the national GOP would be as feckless and weak, and we'd all be so much better off. Unfortunately, they're feckless and strong.
Posted by J at 11:46 AM

This story is so confusing. Why is she being investigated for trying to find out if her husband is cheating on her? Why is that against the law?

When she held that press conference announcing she was going to run and then had to stop in the middle of it because she couldn't find a page in her speech, I knew she was going to bomb as a candidate. But not this badly! lol

I feel sort of bad for her because her husband seems like a sleazeball, but I'm still glad she's going to lose.