Such a model citizen...and derelict

I just returned from voting in the primaries. And drinking a few margs.

Yes, it is primary day in New York, so I did my civic duty and cast my votes. Hillary of course in the Senate race. She's going to win easily, and then, win again in another landslide in the general election in November against whichever sacrificial lamb the Republicans throw against her. 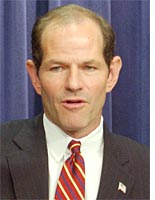 primary easily, and then trounce the GOP candidate in the general. (And I could be wrong, but I think he's one of the guys in that picture from the kosher restaurant I posted yesterday).

Attorney General is a little tougher. It looks like it's going to be Andrew Cuomo winning the Dem primary, so, just to be contrary, I voted for Mark Green. I would be happy with either of them, frankly, and, chances are, the Democrat is going to win in the general, but that race will be a little closer. The likely GOP candidate, Jeanine Pirro, has a following and some name recognition from her time as Westchester County AG. But her sleaze ball husband is such an albatross around her neck, with a tax evasion conviction and a DUI arrest, it could sink her, especially if this year turns out to have a Democratic tide.

Anyway, after being so virtuous, I decided I had to be bad, so I answered the siren call of Cilantro, and sat at one of their outdoor tables and enjoyed some pomegranate margs, chicken quesadillas, and read the Daily News.

lol like you need a virtous day to decide to be bad and go have margs in the middle of the afternoon?? :)