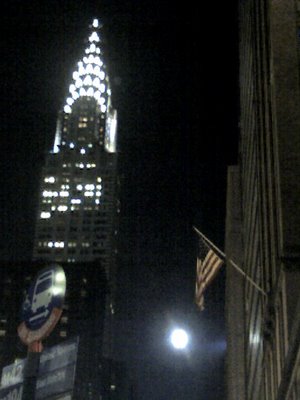 That picture is from my little cam phone, taken Thursday night about 10:30 pm, walking east on 42nd between 5th and Madison, right by the main branch of the library. Those are the NYC scenes I love.

It's hard to tell, but that big blob of light under the flag was an incredibly bright and full moon. It was major league full last night, but I didn't notice more than the usual level of craziness around me.

Of course, that's the Chrysler Building at the left. The Chrysler may actually be my favorite NYC skyscraper, more so than the Empire State Bldg. or 30 Rock, both pretty great buildings in this city, but that one is just so damn art deco cool.

The day started out sort of gloomy. I was guilt-tripped by a friend (and thanks again for that, Jan Brady!), and then went to a subdued reception and screening for a Cinemax documentary about 9-11. Called "Brothers Lost," the director had lost his own brother in the attack on the WTC, and made this gentle, moving tribute, not only to him, but to other guys who had lost their own brother that day. I had already seen it, and was going to leave after the reception ended anyway (I mean, subdued or not, how can you pass up free booze and food on HBO's dime?), but stayed for the first 10 minutes or so of the screening, and as soon as the lights went down and the film started, you heard little pockets of sniffing and soft crying among the audience members, who were all from families who had lost someone that day. Oy. Then I definitely knew it was time to hightail it out. So it was good to see the Chrysler Building in the sky later.

After I left the screening, I went across the street to meet a friend at Bryant Park Grill for a few hours of outdoor imbibing, nice to do while the good weather holds. He's recently married though, and is on a short leash these days, so had to slink home at 10. But I stayed out, as is my want, and headed over to one of my regular Thursday night haunts. One of these days, I will stop being a derelict, I promise.
Posted by J at 12:42 PM

It sounds like being a derilict is a lot of fun. I'll take that over the short leash any day. Nice pic of the moon--too bad you didn't see any oddballs out there, though--what a waste of a good, fall, full moon in New York City of all places.

It sounds like being a derilict is a lot of fun. I'll take that over the short leash any day. Nice pic of the moon--too bad you didn't see any oddballs out there, though--what a waste of a good, fall, full moon in New York City of all places.

Why do people think you can't have fun like that when you're married? :)

I can faintly see a bus stop in that picture for the M42 bus going toward the United Nations but I had to magnfy it to see it. But I used to take that every day when I lived in the city!!