It's the end of the world as we know it, and I feel nauseous

He may have played nerdy eighth-grader Samuel (Screech) Powers in the sitcom "Saved by the Bell." But former TV geek Dustin Diamond can now take his place with Colin Farrell, Tommy Lee and Kid Rock as the star of his very own sex tape.

Everyone who remembers Diamond as a lovable putz is in for a shock once they see a 40-minute video in which he engages in a kinky three-way with two women, sources tell us.

We can't get too graphic here, but word is that the action includes some bodily functions and an act known as a "Dirty Sanchez." 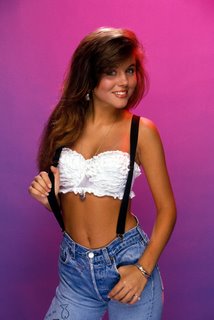 That damn show had Tiffani Amber Thiessen and Elizabeth Berkley on it. But, noooo - we get a sex tape from fucking Screech.


UPDATE: Some of the commenters are getting riled up on this. Let me point out, I did give it the "Ugh" designation, although I'm not sure if that was for the act itself or the fact that Screech is involved. Hey, at least we should be grateful he isn't doing a Cleveland Steamer.
Posted by J at 12:34 PM

Okay, I'll ask..what the heck is a "Dirty Sanchez"?

Damn - why couldn't it have been Mario Lopez! :)

I just had to google it to find out. Ugh! I wish I hadn't.

Well you made me google it too Todemesne- yuck!! How do guys come up with these acts? Disgusting.

I am so NOT looking up a Cleveland Steamer!

Megster, you're smart than I...I looked it up. And I regret it.

See you people make us curious when you say you look it up and react that way so then I have to google to see what it is. Cleaveland Steamer - EWWW!