I'm pretty sure the guy on the right is called Murray

As I mentioned in a previous posting, I was at the Third Ave street fair on Sunday. As you stroll along, there are always people here and there passing out little fliers. Usually, I just ignore them, but once in a while, I'll take one off their hands. I figure it helps them out, they probably have to give them all away or they don't get paid or something, and it's no big deal. It may actually turn out to be for something good, or, at worst, I'll just toss it in the next garbage can I see. (Although I tend to wait till I'm out of their sight - not that they probably even care, but hey, why rub it in their noses).

Anyway, I passed this one guy who was saying: “Great restaurant info here, and a free gift certificate. You look like you have taste!” It was from a web site called specialsbyzip dot com. "What's the certificate for?" I ask, sensibly. "Park East, you'll really love it," he says.

Well, I certainly love my NY restaurants, so I took one, stuffed it in my pocket, and didn't think much else about it. Until tonight, when I logged on to see what it was all about.

First, you fill out some perfunctory info. Mostly they're looking for a zip code, and they say they will email you a daily list of restaurant specials for that evening in your area. You can also put in a work zip code, so you can get info for that neighborhood.

Hmm, seemed decent enough. So I fill out the little fields, and then comes the info for the free $25 gift certificate, and it's for a place called Park East Grill.

It's a Kosher place. Now, regular Too Saucy readers know I love the Jewish girls, so, right away, not bad (although the Kosher thing does tend to mean you're going to be meeting the incredibly religious, which is not positive for a goy like me. But I have tempted these girls before - heh). Well, then I also see the certificate is good toward a Scotch whiskey tasting dinner. And you know I also love the Scotch whiskey.

Bing boing - this is perfect, right?

And then I check out some of the pictures they have posted from a previous Scotch tasting dinner.

In fact, hardly any girls at all in these pictures. 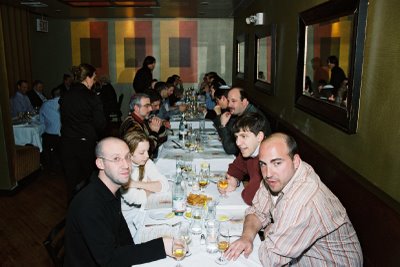 Both of you calm down, the certificate's already been dispersed. You can just go meet Murray by yourself.

That's such a stereotype! I bet half of those guys are like working schlubs who spend their days in a cubicle in an office somewhere.

Wow, Murray looks like an ex of mine. I used to have a thing for Jewish guys.

I love Jewish guys but they do seem to go bald at a young age.

My ex started to lose his hair when he was only 26! (That's not why we're exes by the way, it bothered him more than it did me! lol)

You can also get the Park East Grill certificate and others just by signing up for SpecialsByZip dot com's service.