I promise, I'm going to read some Camus and Shakespeare soon

Among my ongoing guilty pleasures are those incredibly cheesy made-for-TV movies that occasionally pop up, dramatizing the behind-the-scenes intrigue and conflict that plagued some popular, and (of course) in themselves inherently cheesy, TV shows.

They are so fucking bad, they're good. I love them.

And the funny thing is, I don't actually watch the series they are about. I absolutely promise I have never seen an entire episode of Diff'rent Strokes all the way through. Or a Mork & Mindy. (Ok, I have watched the Brady Bunch, especially the later years, when Marcia and Jan were growing up quite nicely heh.)

But the great thing about these movies is, you don't really have to know the actual shows they are about too much to enjoy the Hollywood Babylon aspect of it all. If you have the tiniest familiarity with the programs, you can't help but sit there mouth agape and loving it. They depict the tantrums and the child exploitation and the jealousies and the drugs and the general star/corporate/parental sleaziness behind many of the beloved shows airing now on Nick at Nite or in syndication.

The actors in them are usually picked more for their resemblences to Greg Brady or David Cassidy or Farrah Fawcett than for their acting skills - and that's part of the fun. Especially since they never quite look 100 percent right.

Sometimes there's an unnamed generic network suit "bad guy," and sometimes they have someone depicting real-life execs like Aaron Spelling or Brandon Tarkitoff, dealing with an out-of-control star.

You also have to take them with a grain of salt, of course. Usually, these movies are simply a two-hour dramatization of well-known tabloid reports and insider gossip, like Suzanne Somers going nuts with her giant ego on the set of Three's Company, or Robin Williams' out-of-control drug use on Mork & Mindy, or David Cassidy chafing at the pablum of the Partridge Family. 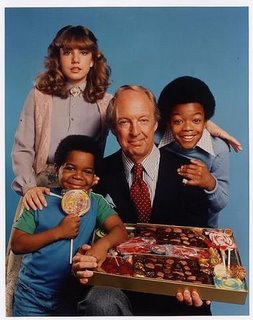 This one tonight apparently was done with the cooperation of Todd Bridges and Gary Coleman (Willis and Arnold, of course), who, during the commercial bumpers, actually appeared and commented on what was going on. To their credit, they didn't always come off as angels in the movie. Also, it looked like a little payback was going on, as their parents were portrayed as exploitative scum. (There was one funny scene where Gary's mother and father pull out of the studio lot in seperate Mercedes, as they went about siphoning most of the money from his $80,000-a-week salary. He ended up working as a mall security guard at one point in his life, also depicted in this instant classic.)

I have to admit, for this genre, it was actually done pretty well, and didn't pull too many punches, up to and including a not very flattering depiction of Bridges' self-destructive drug use, and the spiraling life and sad death of Dana Plato (Kimberly), as she ended up losing all her TV money, posing for Playboy, working as a clerk in a Las Vegas video store, then robbing that store, and, soon thereafter, dying from a drug overdose. It almost negated the whole cheesy aspect of it.
Posted by J at 10:12 PM

I saw the Mork and Mindy one! Too funny. They actually had someone playing John Belushi all druged out since Robin Williaas was with him the night he died.