I like to think of it as being organized 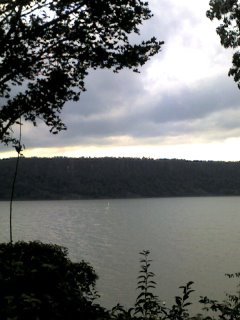 I am such a creature of habit, it's not even funny.

I went to a friend's wedding this past weekend, one of the 672 weddings I'm attending this year. It was up in Hastings-on-Hudson, N.Y., about 30 minutes outside the city via the Hudson River line of Metro North. I'd never been there, but it's a really nice little town, and the reception was at a hall right on the Hudson. Amazing views of the river, with the Pallisades on the other side (dusk pic from my trusty Q). I got to see some former co-workers and had a few cocktails too - if few can be interpreted as the bartender starting to pour the Jack and Coke when I approached. That's a bad sign when a wedding bartender begins to know your drink.

Anyway, being up there has totally discombobulated me. I'm just now getting back to my normal routine. As I have been told, I can be very set in my ways.

And, as I also have been told, as every single person is at weddings, "It's about time we start hearing weddings bells for you!"

Hmm, yes, right about the time Scarlett Johannson (or someone who ranks up there with her in the 9 out of 10 vicinity), gives me a lap dance and, as she's in mid grind, leans in and whispers, "Let's run to Vegas and get married by an Elvis impersonator."

Heh if you elope to Las Vegas with Scarlett I want to be invited to the party! :)

Weddings are the least of it. I get the when are you getting hitched line at Thanksgiving, family vacations, birthdays, etc. etc.