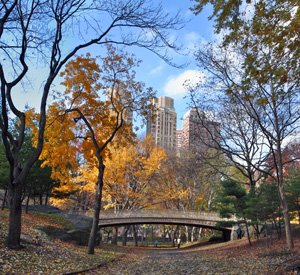 And I don't mean the bad Richard Gere/Winona Ryder movie, I mean the lyrics of that old Sinatra song.

The season doesn't officially change until Saturday, but summer seems over. When I woke up this morning, I was actually chilly for the first time this year, and had to scramble to pull the sheet over myself. And when I got out of the shower, the bathroom mirror was steamed up.

Also, I just got back from lunch at Fetch on Third and sat at one of their outdoor tables, and was quite glad I had wore a denim shirt instead of the polos and tees I've been wearing.

But it's still very nice out, with that crisp, clear air. This is actually my second favorite season in the city, after spring, and before summer and winter. (The only thing winter has going for it, with me not being a cold weather fan, are the holidays and the big Rockefeller Center tree and all that hokey stuff).

Hey!!! I wear denim shirts too, they are so comfortable and sometimes just what you need when it's not cold enough for a real jacket! :)

I think it may stem from the geeky guy I dated my sophomore year of high school, but I usually have an adverse reaction to denim shirts.

I wore a sweater when I left for work this morning, so I know exactly what you're talking about.