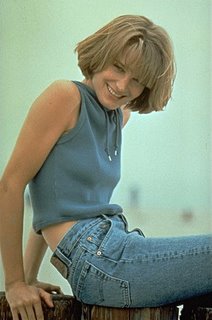 Any time I've seen Bridget Fonda in a movie, I always thought how damn cute she was, what, with that strawberry blonde hair and those freckles, and that cute little upturned nose of hers. Nice tight body, too.

Well, on Sunday, I saw her in no less than two flicks, “SWF,” and “Singles,” that were playing on various movie stations.

When watching “Singles,'' a pretty cool movie from the 90s, where she played a love interest of Matt Dillon, I suddenly realized, I had been thisclose (as they say in the gossip columns) to boinking someone who was, er, with Dillon, who was, I think, with Bridget.

See, I used to work with a girl who had hooked up with Dillon a few times, and we were always very flirty with each other. (Sadly, I haven't seen her in about four years now.) Anyway, one night, we were out with a bunch of coworkers, drinking and flirting and basically being drunky stupid, and she said, “When are we just going to get it over with and screw!”

You know, I still remember that damn line all these years later, it was so wonderfully blunt. 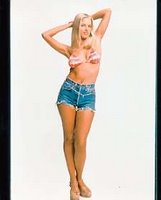 Alas, we were both seriously shitfaced that night and nothing happened – then or ever, for that matter – but, I now realize, that if it had, I could have been two degrees....
Posted by J at 3:06 AM

She was great in Point of no Return.

can you call me please

SWF was cool The other girl in that (who I don't remember her name) was so crazy.

JBK, do you like Kate Hudson? I read today that she and Chris Robinson are splitting up.

My husband will be thrilled, I think she's on his list.

I was out of town for a week, and I didn't have internet accesss, so I had to catch up on your blog today. Nice post about the Israeli girls!

The scene is SWF when she cuts her hair to look like Bridget Fonda and then she first sees her looking just like her is hilarious. She was totally a roommate from hell!! lol

Not a Hipster - I thought you had fallen off the face of the earth. And I do like Kate Hudson, another cutie pie. No Internet for a week? Oy.

No, I didn't fall off the face of the earth, simply in New Mexico. My dad lives outside of Albuquerque, with no TV, either. A week there has guaranteed that my ass isn't leaving the couch until at least Saturday.

A week without TV or the web? I would go nuts!! lol. But at least I guess you get to catch up on your reading.

I read some smutty magazines and started a book I've already read. There was a lot of quiet time. But it was fun, because I haven't seen my dad, stepmom, or grandpa since last May, a little over a year ago. And the time before that was a little under two years. I don't get to see them nearly as much as I'd like.

Back to topic, J, I wouldn't have pegged you as a Bridget type!

When Jennifer threw Bridget's little dog out the window in SWF it was so sad. That's when you knew she was evil!!!

Jill - you didn't actually see her throw the dog, but it became clear she did it.

I am SO MUCH a Bridget type, Not a Hipster. Love perky and toned blondes.