Next episode, Sarah learns who Ansel Adams was

I went with my bud Sarah to a photo exhibit at the ICP on Wednesday night. (And, at 6th and 43rd, it's conveniently close to Bryant Park, so, of course, we had to meet up for drinks first at the BP Grill – because God forbid we do anything without drinking! Jeezus H. Christ.)

Let me tell you, though, there's nothing nicer than an outdoor happy hour on a lazy New York summer evening.

Anyway, I wanted to see the Weegee exhibit. Sarah, who apparently thought it was something to do with a car window washing device, was pleasantly surprised.

Weegee was the famous tabloid photographer who scoured New York's nightlife in the 30's and 40's. The pix he took, so unposed, so stark, are always something to see.

Though he is probably best known for his noirish crime scene photography, even his everyday stuff packs a punch. Look at this shot of a water main break on Madison Ave., circa 1940. How cool is that wave rolling down the street. And that little Gristede Bros. store, of course, was a forerunner of the Gristedes supermarket chain you see all around the city today, 66 years later. 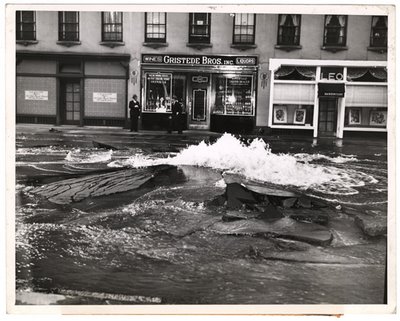 I hate you. And for the record, I didn't think it was going to be anything to do with squeegees, I just didn't know who the photographer was.