The cable news nets devote many, many, MANY hours of air time to missing or murdered girls. Usually white, usually blonde, usually cute.

We've all been subjected to their stories over the years – Natalee Holloway and JonBenet Ramsey and Elizabeth Smart - and blah blah blah and told ad nauseum. I always feel bad for them and their families.

But, as a diarist on Daily Kos notes, what about the American girls who are killed every month in George Bush's Iraq debacle? They don't get such breathless attention, if they get any at all, from the national media. 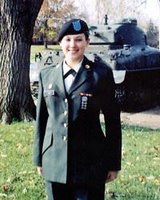 Or Army Spc. Jessica L. Cawvey, age 21, killed by roadside bomb on October 6, 2004. She had a 6-year-old daughter named Sierra. Her uncle said, "She joined the service because she wanted to provide the right future for her daughter." 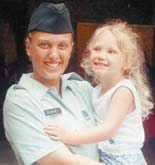 Again, on the Daily Kos site, just some of these many dead girls are remembered here.

They never got the never-ending attention from the cable nets the missing cute blondes do. Different class of people, don't you know.
Posted by J at 1:32 AM

Unfortunately, so many people have died that if they got the airtime provided for other women/girls, there'd have to be a 24/7 channel devoted to them.

Besides, J, didn't you know that everything is great over there? I mean, it's only the MSM that tries to tell us everything is bad.

So sad and not a hipster your right, there are hundreds and hundreds of women and of course men like that and we never hear of them.