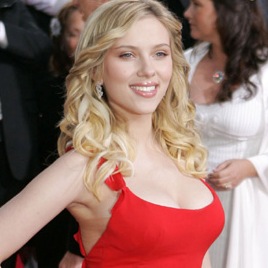 My bud Sarah came over Sunday night and we ended up watching The Island, with Ewan McGregor and the voluptuous Scarlett Johannson. I don't know why this movie didn't make more of a splash when it was in the theaters last year, because it was actually pretty cool, and that's coming from someone relatively hard to please movie-wise.

It was sci-fi, which I enjoy, but it still had a somewhat plausible storyline. I won't give away the plot in case you want to watch it (it's playing on Cinemax On-Demand these days) but there's a couple of pretty funny moments, one of which is when the two stars are running for their lives and are on a building scaffolding which plummets to the ground - they survive, of course - and a construction worker is helping them up, and says, “Jesus must love you. That was the craziest thing I ever seen.” Then, as he pulls the absolutely gorgeous Scarlett up, he gets a good look at her and adds,“I KNOW Jesus loved YOU.” 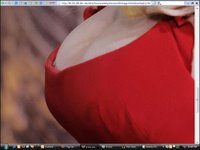 Yes he did. She really is stunning. And as far as I can tell - they're real and they're spectacular (to use the classic line once uttered by Terri Hatcher on an episode of Seinfeld).

There's also a great scene when her character sees a TV commercial for perfume that Scarlett actually did in real life when she was about 17, and gapes in amazement at seeing herself in it. That doesn't make sense, I suppose, if you don't know the movie's plot, but it's a cool moment. That B&W photo is, I believe, from the same ad campaign as the TV commercial seen in the movie. 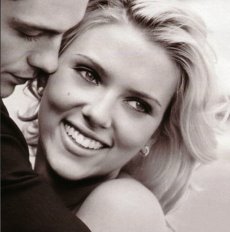 And she was wearing a ponytail in a lot of the flick. I don't know what it is about girls in ponytails, but I love that look. So cute. Then again, Sarah was mixing frozen margs all night - if it had went on for another hour, I probably would have liked Ewan McGregor in a ponytail.
Posted by J at 1:51 AM

lol they are so NOT real!

Megster guys always like to believe every set of boobs they see are real:)

That was a pretty good movie but it wasn't really plausible.