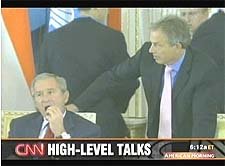 Lots of chatter about the incident at the G-8 meeting in Russia where an open microphone caught Boy George talking to British Prime Minister Tony Blair, apparently unaware that their conversation was being fed out to the media.

First of all, don't these people know by now that you should always consider a microphone live. Idiots.

And lots of people are laughing, or aghast, that Bush said a mild curse word: “See the irony is that what they need to do is get Syria to get Hezbollah to stop doing this shit and it's over," Bush told Blair as he chewed on a buttered roll.”

I could give a fuck that he cursed. What's appalling is the president of the U.S. acting like a trailer park, low-class frat boy.

While he's talking to Blair, Bush is literally cramming a buttered roll in his mouth at the same time. You really have to see it. Real class act there.

None of this should be surprising any more, I guess, but it is still mortifying that this guy represents our country.

And by the way, how is what he's talking about "irony?"

Then he displays some of that world-famous intellect, as he marvels that it will take Russian President Putin as long to fly home to Moscow from Saint Petersburg as it will take Bush to return to Washington: "You eight hours? Me, too. Russia's a big country and you're a big country," Bush said. "Takes him eight hours to fly home. Russia's big and so is China. Yo Blair, what're you doing? Are you leaving."

"Russia's big and so is China." Wow thanks for that analysis Mr. President. lol

And it's amazing how the republicans used to say Bill Clinton was undignified in the White House because he got caught with Moinca. At least he knew how to conduct himself in public when he was representing the USA, especially around other world leaders.

Very best site. Keep working. Will return in the near future.
»