The only surprise at this point would be some competence 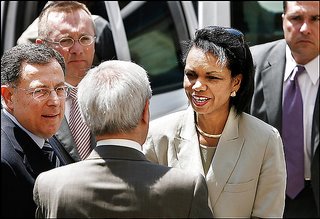 Can the media please stop playing along with the Bush regime, breathlessly reporting their latest "surprise visit" to some godforskaen place in the war-ravaged Middle East?

The very fact that they have to sneak into these areas, especially Baghdad, which the U.S. supposedly conquered and made safe for democracy three years ago (remember Mission Accomplished?) shows just how disastarous foreign policy is under these idiots. And the fact that "Condi," as she's so obnoxiously called, is just finally getting around to doing some shuttle diplomacy after the carnage has been underway in Lebanon and Israel for the last few weeks is telling in and of itself.

Say what you will about the odious Henry Kissinger, but that guy worked those foreign trips like a maestro when he was Secretary of State.

And just what the fuck was she smiling about when she got there? The place is on the verge of disintegration and she had a big buck-toothed grin pasted on like she's shoe shopping on Fifth Avenue again. It's a fucking humanitarian tragedy there, nothing to smile about. Jeezus H. Christ.