"I am a sexually aggressive woman - and I like it!" 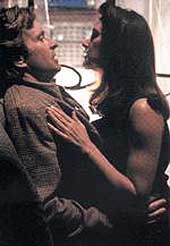 Hello Saucy-ites. I'm back in the city after a few days at the lovely Jersey shore, and I just watched a silly movie called “Disclosure.” That headline quote is from it, with Demi Moore huskily saying those immortal words.

It was on one of the movie channels tonight, with a pre-op Demi looking mighty fine. There is one scene where she is attacking Michael Douglas, and her legs are quite prominently displayed. Muscular, toned, shiny. How do they do that? Damn, she looked good in this movie.

And, of course, the ironic thing is, it is about a man being sexually harassed by his female boss, with admitted sex addict Douglas playing the victim. Several years ago at Hurley's, a midtown bar, he was seated at the booth next to mine, with a young Asian woman who was not his wife. Let's just say they did not appear to be there at a business meeting.

Of course, the girl I was with was gawking shamelessly, while I was trying to play it cool so I could get some good info for a Page Six sighting. Sigh.

But that whole aggressive/submissive female thing that Demi was portraying is really fascinating. God bless them.
Posted by J at 10:14 PM

JBK - legs get waxed and then probably she got some product like Michael Kors for shine.

I saw Disclosure a few years ago. It was pretty good but I could never figure out if Donald Sutherland was conspiring with Demi in it??

Disclosure was ok, I saw it too! Altho Michael Douglas was the same character he is in every movie he's in! lol

i worship aggressive women.please e mail me on san_jose_martin@yahoo.com and i will send you an invitation to join my blog :--