Hello all. I'm back in the city after a refreshing little weekend jaunt in Montreal.

What a fun town. The weather was delightful, the people were charming, the food was magnifique, and the nightlife wasn't bad. There was also a jazz festival going on and we caught a couple of performances. Tres bon.

It's always good to get home though and use my own bathroom. I hate any bathroom but my own, no matter how nice the hotel. Call me crazy, but what can I say, it's just one of my peccadilloes.

We rode the subway up there at one point, and I have to say, as disgusting as the 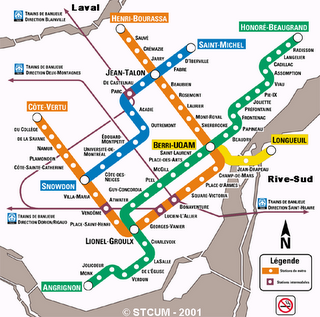 NYC subway can be some times, it actually is pretty comfortable compared to Montreal's, which isn't air conditioned. I guess they don't really have a lot of steaming hot days up there, but this weekend turned out to be pretty hot (high 80s), and there was no A-C! Can I just say oy (I don't know the French for oy or I would use it. Tres oy?)

Also, my traveling companion noticed something quite interesting. (By the way, I told her I don't use real names on the blog unless anyone specifically says to do so, but she didn't even want me to make up a nickname, ala Corky, as she was sure her boss would somehow know it was her. I told her the odds of her boss reading Too Saucy are slim to nil.

Maybe I should call her Lady Voldemort? Anyway, I digress, She Who Must Not be Named noticed something delicious.

She pointed out that an awful lot of the girls in Montreal – who are quite stunning by the way, with amazing figures, and they dress very, very sultry - tight tops, tight jeans, mini skirts, heels - were incredibly buxom. I mean noticably so.

I don't know if it's a clothing thing (they do wear a lot of low-cut tops) and maybe there is also a lot of push-up bras sold there, or maybe it's surgery. But it was hard to miss.

Now I'm back among the land of the flat. Sigh.

I wondered why there was radio silence! :) I love Montreal! Did you go to some of the places on Crescent Street off St. Catherine?

I still dream about a croissant I had at Paris Bistro in Montreal. Soooo good!

Montreal rocks and I love their accents.