It's been a hot, humid weekend in NYC, and so a bunch of movies were watched and dissected in the air-conditioned splendor of chez jbk. It's always hit and miss, my friends, but usually miss. I know that Sweet Baby Jesus is watching, too, and, one of these days, I will find a bud who has the same tastes in movies that I do. But so far it ain't happening. Thanks for nothing, Baby J.

On Saturday, my friend “Velma” came over and we watched The Machinist, Dark Water and Indecent Proposal. And drank lots and lots and lots of Shiraz.

Two “creepy” movies, and one goofy “love being tested” film. First, in The Machinist, which, in all fairness, was my choice, Christian Bale looked incredibly gross and quite frightening. But, the main movie crime: I figured out what was going on in about the first 20 minutes - eh, not so intriguing.

Dark Water: that was a Velma choice. Can we say, oy. Apparently, it is an American remake of a Japanese horror film, or, as the movie buffs say, a J-Horror (yes, they actually say that. Other examples are The Grudge with Buffy's Sarah Michelle Gellar, or The Ring, with Naomi Watts).

It was ok, but, again, sort of predictable. I do like Jennifer Connolly, though, who always rekindles my 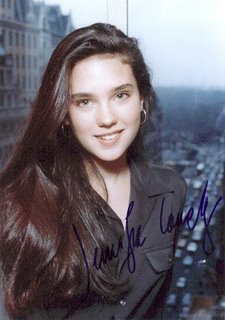 never-ending dilemma: Irish girls or Jewish girls? Wow, do I like Jewish girls, but Jennifer, with her freckles and cute little upturned nose, and that bod...mm, mm mmm. I suppose one day I may luck out and meet an Irish Jewish girl. Do they even exist in nature?

Indecent Proposal: well, let's just say when you see Demi Moore in a movie that was shot well before she got the plastic lips and boobs - damn, she was decent looking. But, the happy ending, when she and Woody Harrelson meet each other at the pier, yawn. Interesting concept though.

Then, on Sunday, my bud Sarah took me out to a well-deserved dinner at Sala Thai on Second (love that tom kah gai coconut milk soup, by the way!) and then we retired to chez jbk to watch Notting Hill and The Woodsman. Quite a dichotomy, huh?

Ok, Notting Hill. I'd actually (embarrassingly) seen this one before (no doubt under pressure from another gal), and yet I couldn't even remember most of it, it was so unmemorable, seeing it a second time around. When Julia Roberts gushes: I'm just a girl, standing in front of a boy telling him I love him (or something like that) - ugh. One of the reasons this movie was so successful, I think, was it apparently gave the audience some sort of bizarre hope that, even in their drab, empty little lives, they could have a chance with a world-famous, Julia Roberts-level movie star. Uh, yeah. Sure.

Then, when you remember that Hugh Grant - and his patented, stammering, blinking, befuddled guy - in real life threw aside Elizabeth Hurley, one of the six most beautiful women in the world, for a street whore he picked up on Hollywood Boulevard, well, just think about that, you star-struck gals.

Finally, we watched The Woodsman, with Kevin Bacon, who is 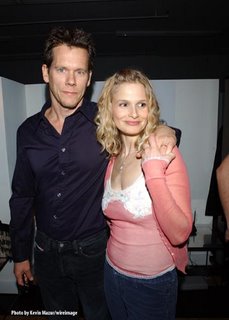 actually one of my fav actors. Damn, he is creepy and melancholy in this. And with real-life wife Kyra Sedgewick, with her wavy, curly blonde hair, and that Julia Roberts mouth - except it's real - playing the woman who saves him, well this was the one I liked best out of the 327 or so movies I watched this weekend.

It was also a Sarah pick, so I let her claim “Best Movie of the Weekend” bragging rights. Bitch. And now she's passed out on my couch from too many Thai beers and pinot grigios. I'm 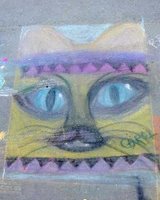 going to go paint cat whiskers on her face just to punish her.
Posted by J at 11:19 PM

Hey I saw "The Machinist" too last year. But I couldn't figure out half the time what was real and what was a fantasy. I hate when movies are like that! I've seen Notting Hill too but thought it was cute.

Your so mean! lol!!! I thought Dark Water was pretty scary, especially because I've actually been on Roosevelt Island and it does seem sort of weird there when it rains and you can't even see Manhattan. I never heard of The Machinist but I'll rent it just to see what the fuss is about...