Turning the corner, yet again?

I love how the White House and its apologists are trumpeting Bush's surprise visit to Iraq as some sort of great sign that progress has been made in that wreck of a country.

When you look at the way the visit went down, though, it puts in stark terms how insecure Iraq has become since the U.S. invaded to topple Sadaam.

Unlike every other presidential visit to another nation, it was done in utmost secrecy. The President of the U.S. had to sneak into town like a wanted man. The public and press weren't notified the visit was going to happen, hell the president of 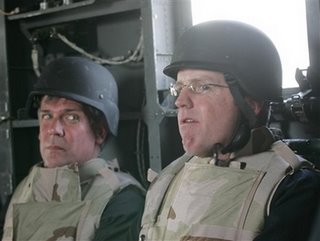 Iraq didn't know until five minutes beforehand that Bush was in Baghdad. The people on the trip were outfitted in bulletproof vests, flak jackets, helmets, and never ventured from a heavily secured military base once they landed. And the visit lasted all of five hours before they scurried out of town on Air Force One.

Iraq has devolved into a revolutionary state, with sectarian violence killing thousands. Almost 2,500 Americans have been killed, tens of thousands more wounded, and Iran is pulling the strings on swatches of the country as it makes its own move to develop a nuclear bomb. The Iraqi people have less electricity and clean water now than they did before the war. Women, who, unique in that part of the world, had prominent places in Iraqi culture and government under Sadaam, are now being harassed by Islamic religious police eager to see them basically enslaved like women in places like Saudi Arabia, Iran and Afghanistan.

Oh yeah, things are going great over there. Heckuva job, Bushie.
Posted by J at 11:08 AM

No no we turned the corner when Hussein was captured, no when we killed his sons, no when Bush said mission accomplished, no, it was when there was an election, no.....