The things you learn in bars 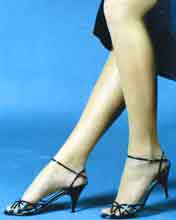 Did you know women have longer legs than men? I'm not talking about 6' supermodels, just in general (and obviously not in every case), if a man and a woman are the same height, apparently, the woman will have longer legs.

This was discovered last night when I went out for drinks with my friend, Sarah, and we were at Fetch on Third Ave., and both of us, lazily, tipsily, had our legs propped up with our knees resting against the bar, and she noticed that her kneecaps were higher than mine, even though she's about 3 inches shorter.

I defensively told her she was a freak of course, but, according to the Internet - so you know it must be true - women have longer legs in relation to their body than men do: Women tend to have relatively longer legs in comparison with their height than men, with the thigh often accounting for a greater percentage of leg length.

Ha I wish I could get rid of some of my thighs!

JBK stick with boobs, they're much sexier than legs! :)

It's true - I tried on my bf's pants once and they were too big for me in the waist but they were like capris on the legs even though he's taller than me. I wonder why girl's have longer legs??

i love the philly spring roll thingys at fetch.....and yes i am the same height as my best friend's bf and i have a 35.5 inch inseam he on the other hand is sporting a 30

I'm glad to see my friends aren't the only freaks out there, anon! :)

I've never had the spring rolls at Fetch though, usually just a burger, but I'll give them a shot sometime.

ok they are called offically: Fetch's Filly Cheese Steak Egg Roll (not spring rolls as I stated earlier) A little ketchup to dab them in and you have yourself an instant hangover cure...

ok they are called offically: Fetch's Filly Cheese Steak Egg Roll (not spring rolls as I stated earlier) A little ketchup to dab them in and you have yourself an instant hangover cure...

I have to admit that sounds pretty good especially for a hangover. For some reason anything sort of greasy does wonders when you're getting over a drunk :)

testosterone inhibits growth in the long bones of the leg, hence the difference

Anonymous - how the heck could testosterone have anything to do with the leg? That doesn't sound true with all respect