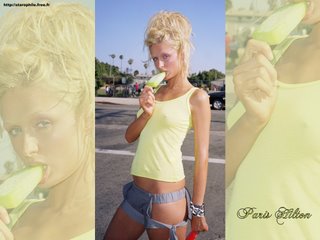 Paris Hilton has a CD out, and people are liking it.

In just its fourth week of release, the reggae-dusted "Stars" is already the most requested song at Los Angeles' KIIS-FM, from which it was first leaked on Ryan Seacrest's show, and at New York's Z100, typically the highest-rated pop station in the city. It was the most downloaded song at Yahoo! Music and number six at the Apple iTunes Music Store, putting it ahead of such acts as Rihanna and the Red Hot Chili Peppers.

i just heard Paris is going to be on some special on Vh1 about this band Platinum Weird. i was reading that it was Dave Stewart from the Eurythmics first group in the 70s that never released their album back then, and now they’re doing a special on them.

anyone else heard about this?

Borat - is she going to be singing with them? But how can they still be together if there from the 70s? Maybe its like one of those VH1 shows where they look back at a year and have celebrities talk about it and she is going to just do that!

Dave Stewart is cool as hell. I can't believe he's doing something with Paris. This sounds like a rumor.

lol - I may be wrong but I don't think this was supposed to be a Paris Hilton fan club posting! That's what happens when you google and look for stuff, you get sent to the wrong place sometimes!! :)

She looks pretty good but I can't believe she can sing?