Random thoughts for a Friday afternoon

Is there anything better than spending a lazy Friday afternoon at an Irish bar on the Upper East Side, eating fish & chips, drinking Guinness and watching the World Cup? Also, there seem to be a lot of people in New York who can take an afternoon off to sit in a bar. Like me. Lazy bastards.

On my way to the bar, I saw an electric wheelchair in a garbage pile on the side of E. 89th Street. When you walk down the streets of this city, you see everything being discarded - computers, TVs, dead bodies - but there was something weird about seeing a wheelchair there. I don't know if the person using it had simply upgraded to a better model or had died. But it was very forlorn looking.

I'm spending Saturday night in - gasp - the Garden State. One of my friends is getting married tomorrow and I am staying over at the lovely Grand Summit Hotel in Summit, N.J. Oy. Wish me luck. If I come back with big poofy hair and long 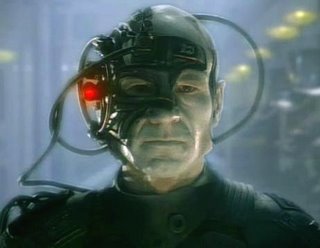 fingernails, you will know I have been absorbed, like Picard when he was captured by the Borg in Star Trek: The Next Generation.
Posted by J at 4:55 PM

hah I dont know how anyone gets to take a Friday afternoon of to drink. You suck.

Ah, you got to love Picard.

Jersey--reminds me of "Working Girl," and yes, they had a wedding in that movie, too.

Hi! Love you blog articles.
A passionate fan for years so I started my own blog :-)
science-fiction@theblogverse.com