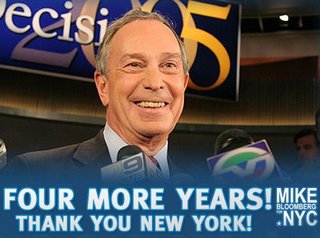 The Times has a fun editorial today on Mayor Bloomberg. It notes he has been speaking out lately on a host of issues that go beyond New York, including some great ones:

On so-called intelligent design theory: "Creationism by another name."

On politicians who "equivocate," or parse their position on a woman's right to choose an abortion: "On this issue, you are either with us or you're not. Period. You can't have it both ways."

On illegal immigration: "We're not going to deport 12 million people, so let's stop this fiction."

On stem cell research, the mayor punctuated his support with a $100 million donation for projects at Johns Hopkins University.

Sometimes, he does things that annoy me (like his refusal to deal with the Transit Workers union that led to a strike last year right around Christmas time), but usually he's on the ball. And, of course, let's remember one of his greatest accomplishments - ramming through the ban on smoking in bars. For that alone he has my undying gratitude.

Bloomie is sort of a Republican, but, as the Times notes, he is a Democrat-turned-Republican, who took the label just so he could get that party's nomination, which he wouldn't have been able to get in the candidate-rich Democratic party. He's my favorite type of Republican, a RINO (Repub. in Name Only).

He says he has no eye on higher office and won't be running for President, and, of course, as a gay-friendly, gun-control-friendly, abortion-rights-friendly candidate, he has absolutely no shot in getting the GOP nomination anyway. Not to mention, he's Jewish. That don't play too well down in places like Alabammy, don't you know. 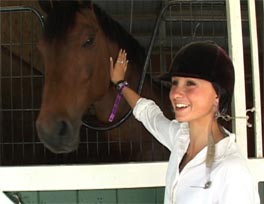 But kudos to Bloomie. (And his cute billionaire daughter).
Posted by J at 11:41 AM

hehe I think you just want to meet his cute billionaire jewish daughter! :)

I like him too. I wish he could run for a 3rd term but I dont think it's allowed under NYC law.

The smoking ban was the best - I used to hate coming home reeking of smoke on my clothes and hair!