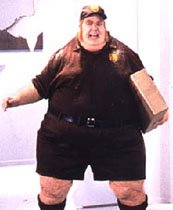 Rush "To the Buffet" Limbaugh was detained at a Florida airport, coming back from the Dominican Republic, with unauthorized bottles of viagra.

This could mean trouble for his recent deal, skating over drug charges that you or I would have been thrown in the clink for: Under the deal reached last month with prosecutors, Limbaugh was not to be arrested for any infraction for 18 months in exchange for authorities deferring a charge of "doctor shopping." Prosecutors had alleged the conservative talk-show host illegally deceived multiple physicians to receive overlapping painkiller prescriptions.

And now it was viagra. He's not only fat, apparently the right-wing radio hatemonger can't even get it up.
Posted by J at 12:01 PM

It is interesting that Rush, a divorced, single man, would have bottles of Viagra in this possession. I presume he advocates the view that single men have no business having extramarital sex. What use could a true, conservative believer possibly have for Viagra in this circumstance? Certainly it would be different if he were married and had erectile dysfunction that, in order to fulfill his marriage vows, needed remediation. But since he's divorced, I can only assume he either 1) possessed a medicine for which he had no use, or 2) he is a hypocrit.

Good point, anonymous! These "family values" conservatives are opposed to sex outside marriage. Leaving aside the fact that he's divorced 3 times!!! (so much for family values) there are so many levels of hypocrite here it's not even funny!