I just read one of the astute Too Saucy commenters in an earlier post about Rush Limbaugh's recent little kerfuffle bringing Viagra through airport customs (when it wasn't quite prescribed to him), sensibly noting – while I was busy making juvenille “can't-get-it-up” jokes – that it's quite interesting that here is one of the major icons of right-wing, family values, conservative America, here is Mr. Impeach Clinton Now, using Viagra when he's not actually married and, you know, that crowd says sex should only take place within the holy bonds of matrimony.

And, of course, that is a wonderful point.

It is quite fascinating that Rushbo – who has been married and divorced three times!!! - was on a trip to the Dominican Republic, and felt compelled to bring boner pills with him. What is an unmarried fellow doing with pills to help his droopy penis? He shouldn't have to worry about his droopy penis, what, with not being married and all. (Not to mention that the Dominican Republic is infamous for attracting sex tourists seeking underage girls, but, hey, that's a whole other problem).

You know, when he divorced his third wife, who was an usherette at the Kansas City Royals ballpark, back when he was director of promotions for the team – oh wait, my bad - it was actually his second wife he met in KC at the ballpark. He met his third wife – true story – on the Internet. Anyway, when he met her, I'm sure he didn't tell her he would have to take medication to perform his husbandly duties.

No, no, no, now wait a minute. Boy, is my face red. I am so getting my Republican divorces mixed up here.

Newt Gingrich, the former Speaker of the House, was the one who 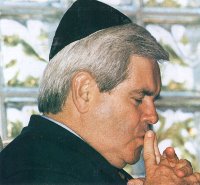 served divorce papers to his second wife as she lay in a hospital bed recovering from cancer surgery. This was during the height of the GOP move to impeach Bill Clinton because he got a blow job. Newt, who was spearheading that drive, was having a fling with a young Congressional staffer. He later married the young chippy, who is now proud Newt wife #3.

It was indeed our own Rudy, who divorced his cousin to marry Donna Hanover, and then divorced her when he announced, during a live televised press conference no less, that he was having an affair with his press secretary, Christine Lategano. Oh, wait. Ok, he 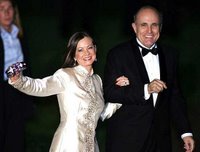 didn't actually admit to that one, although everyone in City Hall knew about it. But he did indeed divorce Donna, and now, like all good family value conservatives, is on wife number three, Judith Nathan.

And the absolutely fucking amazing thing: the right-wing, holy-roller sheep keep falling for their family value shit time after time after time.
Posted by J at 12:57 AM