Can these people stoop any lower? 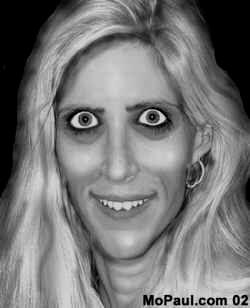 Every time I think conservative Republicans can't get any scummier, I'm quickly disavowed of that notion.

Ann Coulter, truly one of the slimiest right-wingers out there, is pushing a new book, and in it she bashes 9-11 widows who have dared been critical of Bush. Coulter, an anorexic fantasy whore for conservatives who actually consider her attractive, says the widows are somehow trying to capitalize on their husbands' deaths.

She says of them: "These broads are millionaires stalked by grief-parrazies...I have never seen people enjoying their husband's deaths so much."

Coulter also, of course, bashes Democrats, who she claims use 9-11 or family members of fallen troops so that no one dare question them.

As Salon points out, of course, this is a bit bizarre coming from a women in a party which is expert at using troops and 9-11 family members as props, whether its Bush watching the Flight 93 movie with teary family members of passengers who died that day, or inviting the father of a fallen solider to throw out the first pitch at a ball game with him, or when the whole damn party held their 2004 convention within walking distance of Ground Zero.

Even Matt Lauer was stunned at this skank's classlessness when she went on The Today Show to push her fucking book:

Coulter: This is the left's doctrine of infallibility. If they have a point to make about the 9/11 Commission, about how to fight the war on terrorism, how about sending in somebody we are allowed to respond to. No. No. No. We have to respond to someone who had a family member die. Because then if we respond, oh you are questioning their authenticity.

Lauer: So grieve but grieve quietly?

Coulter: No, the story is an attack on the nation. That requires a foreign policy response.

Lauer: By the way, they also criticized the Clinton administration.

Coulter: Not the ones I am talking about. No, no, no.

Lauer: Yeah they have.

Lauer: So if you lose a husband, you no longer have the right to have a political point of view?

Coulter: No, but don't use the fact that you lost a husband as the basis for being able to talk about, while preventing people from responding. Let Matt Lauer make the point. Let Bill Clinton make the point. Don't put up someone I am not allowed to respond to without questioning the authenticity of their grief.

Lauer: Well apparently you are allowed to respond to them.

Coulter: Yeah, I did.

Lauer: So, in other words.

Lauer: What I'm saying is, I don't think they have ever told you, you can't respond.

Coulter: Look, you are getting testy with me.

Lauer: No. I think it's a dramatic statement: "These broads are millionaires stalked by grief-parrazies"? "I have never seen people enjoying their husband's deaths so much."

Coulter: Yes, they are all over the news.

I saw this twat once at a martini bar I frequent on the Upper East Side. I wanted to throw a lemon drop martini in her repulsive face, but didn't. Sigh.
Posted by J at 1:24 PM

She's horrible. Any time she comes on TV I have to quickly change the channel I cant stand looking or listening to her.