And that tsunami thing, that was a hoot too 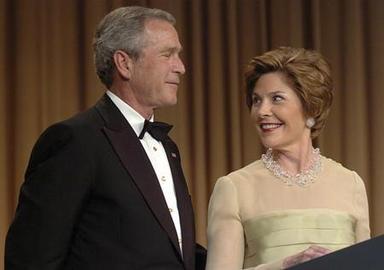 Anytime I think maybe I'm too hard on Bush, that he surely can't be as stupid and callous as I make him out to be here, something comes along that makes me realize – No, he really is a fucking idiot.

The DU site found a 2003 interview Boy George and his zombie of a wife gave to right-wing hack Peggy Noonan in Ladies Home Journal.

The insensitivity, the sheer banality of these two, is astounding to behold. Because, on the night of 9-11, as the foot of this island was still smoldering, 3,000 souls lay buried under burning rubble, and the country was in a state of shock, the Bushes, bless their hearts, found something to laugh at.

Read this on an empty stomach:

Noonan: You were separated on September 11th. What was it like when you saw each other again?

Laura Bush: Well, we just hugged. I think there was a certain amount of security in being with each other than being apart.

George W. Bush: But the day ended on a relatively humorous note. The agents said, “you’ll be sleeping downstairs. Washington’s still a dangerous place.” And I said no, I can’t sleep down there, the bed didn’t look comfortable. I was really tired, Laura was tired, we like our own bed. We like our own routine. You know, kind of a nester. I knew I had to deal with the issue the next day and provide strength and comfort to the country, and so I needed rest in order to be mentally prepared. So I told the agent we’re going upstairs, and he reluctantly said okay. Laura wears contacts, and she was sound asleep. Barney was there. And the agent comes running up and says, “We’re under attack. We need you downstairs,” and so there we go. I’m in my running shorts and my T-shirt, and I’m barefooted. Got the dog in one hand, Laura had a cat, I’m holding Laura —

Laura Bush: I don’t have my contacts in , and I’m in my fuzzy house slippers —

George W. Bush: And this guy’s out of breath, and we’re heading straight down to the basement because there’s an incoming unidentified airplane, which is coming toward the White House. Then the guy says it’s a friendly airplane. And we hustle all the way back up stairs and go to bed.

Laura Bush: And we just lay there thinking about the way we must have looked.

Noonan: So the day starts in tragedy and ends in Marx Brothers.

He knew he had to provide strength and comfort to the country? So why the hell didnt he do that?

I love your website. It has a lot of great pictures and is very informative.
»

I really enjoyed looking at your site, I found it very helpful indeed, keep up the good work.
»