What's up with Hillary? 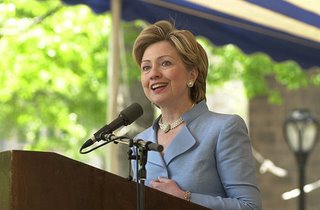 I like Hillary Clinton and I'm glad she's my senator, but sometimes, I can't figure her out.

Recently, she has made overtures to Rupert Murdoch, the right-wing media baron who owns the New York Post and Fox News Channel.

She attended a Fox party in Washington DC a few weeks ago, and now word has come out that Murdoch's News Corp. is throwing a fund raiser for her Senate campaign.

I realize it's probably a smart political move, as she's hoping the Post and Fox will lay off their usual Democrat-bashing, and Clinton-bashing, during her run. It might even work, especially with the Post. And Murdoch has certainly been known to put his financial interests ahead of his right-wing ideology. In the U.K., one of the right-wing newspapers he owns there, the Sun, backed Labour's Tony Blair, throwing aside its tradition of Conservative party backing.

But it still gives me pause when I see her cozying up to right-wing entities.

My real issue, though, is that I wish she would spread her wealth around a little more. She's got something like $20 million in her campaign bank. She has, to all intents and purposes, no serious competition this year. The New York Republican party has imploded, and the candidates for the GOP senate nomination are basically vying to see who is going to be the sacrificial lamb whose ass is going to be handed to them by Hillary on election day.

But the former first lady is continuing to fund raise as if she is facing a real fight. My friend Corky just sent me an invite for a lunch for Hillary, with tickets starting at $125, and going up to $1,000.

I would consider contributing if she would start giving a lot more of the campaign cash to other Democratic candidates around the country who are facing real races, and who are financially out gunned by their Republican opponents who enjoy the backing of big business and other special interests. The Dems have a serious shot to take the House this year, but they can't do it if some of their candidates can't compete in the elections. That's where the money should be going, not here to Hillary's race, where it's not needed any more.

Yes, I realize she is probably hoarding it for a 2008 Presidential run. But, the fight is for the House NOW. 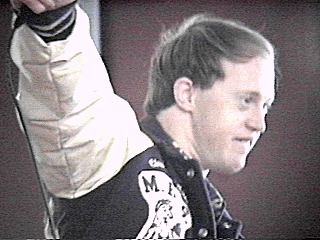 And Corky, of course, is confused when it comes to politics. She thinks she's a Republican, but she fund raises for Hillary, and browbeat me to take her to a media screening of Michael Moore's great liberal documentary Fahrenheit 911 before it opened a few years ago. Make up your mind, schizo!
Posted by J at 11:06 AM

I love Hillary Clinton, but I think the Repubulicans hate her so much she will have a hard time of winning if she runs for Pres. in 2008. Sad.

It's all about 2008, JBK, that's what she's fundraising for. She is going to be re-elected in NY easily.

Greets to the webmaster of this wonderful site. Keep working. Thank you.
»