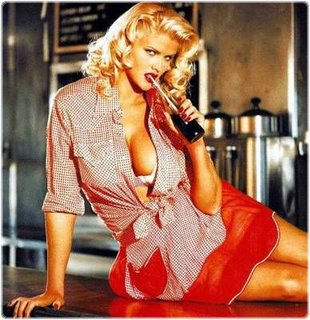 The Supreme Court has ruled in favor of Anna Nicole Smith in her quest to get millions of dollars from her late billionaire husband's will, which is being contested by the guy's children.

The Bush administration has instituted warrentless wiretapping of American citizens, thrown hundreds of people they say are terorists into jail without charging them with anything, and let the oil companies write the nation's energy policy, and the Court sits by despite legal challenges being raised in those cases - but this one they decide in record time. Nice to see their priorities.

And, contrary to rumor, porn-loving Clarence Thomas' hands were visible on the bench the entire time the case was being argued. I don't know how those rumors get started.
Posted by J at 11:42 AM

Clarence Thomas - what a freak! lol

Yowza she has got some bodacious tatas!

Blue Steele, I believe that was actually Clarence Thomas' written ruling in a concurring opinion on this case: "The court rules prima facie that Miss Smith has some bodacious tatas and is entitled to collect money from the will."

Yeah but too bad for you guys her "tatas" arent real - they're fake!!!

i also heard that lawyers from both sides found handfulls of pubic hair in their copies of the ruling.

What? Barbie World - are you serious? Oh, I never guessed! I'm so disallusioned now!

but funny. dont you remember the whole pubic hair on the coke can fiasco?

No, I don't remember that. Please enlighten us.

hehe I remember that story. Not a Hipster, Clarence Thomas was accused by the woman who was accusing him of sexual harrasment when she worked for him that one day he had put some of his pubic hair on the top of her can of Coke! Totally disgusting and I can't believe that guy is on the Supreme Court.

Ergh, I do remember that now. GROSS!

I want to puke now lol. Who put him on the Court? I know it wasnt Clinton! Was it Reagan?

Neither, it was Dubya's daddy.

Ahh, another Bush family triumph lol. How does this family get anywhere near the White House?

What a great site, how do you build such a cool site, its excellent.
»