He really is Dr. Evil 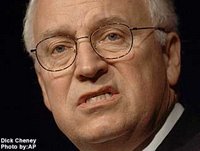 Dick Cheney is often seen as the real power in the White House, the puppetmaster pulling the strings on Boy George to benefit his corporate friends, and, of course, he was one of the most vocal proponents of the Iraq debacle.

A fascinating profile of him in Vanity Fair by Todd Purdum also points out that Cheney is paranoid, bizarre, and, well, just plain nuts.

"When he gave his friend Robin West and his twin children a ride to the White House a couple of years ago, West commented on the fact that Cheney's motorcade varied its daily path. 'And he said, "Yeah, we take different routes so that 'The Jackal' can't get me," ' West tells Purdum. 'And then there was this big duffel bag in the middle of the backseat, and I said, "What's that? It's not very roomy in here." And [Cheney] said, "No, because it's a chemical-biological suit," and he looked at it and said, "Robin, there's only one. You lose.' "

And, despite suffering several well-publicized heart "incidents," Cheney apparently continues to eat like a madman: "At age 65, Cheney is easily 30 or more pounds overweight, seems to have slacked off on what was once a more rigorous diet, and appears to suffer from recurrent bouts of gout. At a roundtable lunch with reporters a couple of years ago, two who were present say, he cut his buffalo steak in bite-size pieces the moment it arrived, then proceeded to salt each side of each piece."

This is the guy running the country. Jeez, hard to believe we're in so much trouble, isn't it?
Posted by J at 2:00 PM

maybe that explains why he always looks constipated

I would say - good maybe he'll keel over from another heart attack, but then Bush will put someone in as VP who then runs as the Republican president candidate in 2008 and who will have a leg up on the Democrat, so I worry about that.

He eats buffalo steak? What a horrible man.