The president said Florida Gov. Jeb Bush is well-suited for another office and would make "a great president."

"I would like to see Jeb run at some point in time, but I have no idea if that's his intention or not," Bush said in an interview with Florida reporters, according to an account on the St. Petersburg Times Web site.

This fucking family is like the monsters in horror movies like Friday the 13th or Halloween; they just keep coming back in sequel after sequel. They won't go away.

And the American people vote for them, which is the real horror. You would think after the debacle of George, Sr., the public would have been a little wary of his son, seen as a pale, dim-witted imitation of his old man. Although, to be fair, the public did actually cast more votes for Al Gore in 2000, of course, but that election was stolen in Florida, and doomed in the archiac electoral college.

And now, they're making noises about Bush III: Jason Lives. 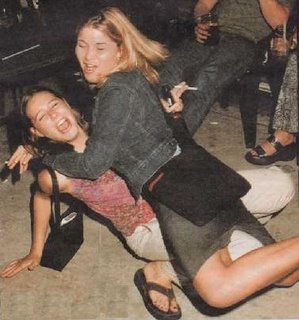 Then, after Jeb's done driving the country farther into the ground, I guess it's only a matter of time before Jenna or Barbara 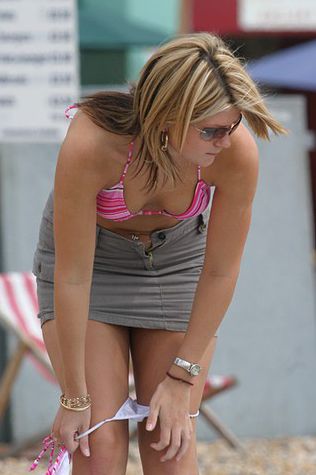 get a shot. They couldn't do any worse than their father, I suppose, and at least they seem like they would be fun to party with, compared to that teetotaling, reformed drunk who spawned them.
Posted by J at 11:58 AM

I've seen that picture of her falling down drunk before, but I've never seen the one of her taking her panties off in public - good stuff! :)

If Jeb Bush ever gets elected president I'm moving to Canada, no kidding. Enough of these poeple already!

Hey what a great site keep up the work its excellent.
»