Do you want to hear the good news first, or the bad news? 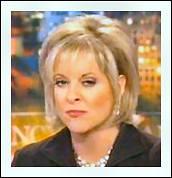 The good news, your missing kid has been found alive.

The bad news, you've got to speak to Nancy Grace about it.

A producer of Nancy Grace's show on Headline News informed a Colorado woman that her missing child had been found alive. Then she had to speak to Grace on the air about it.

GRACE: To Mary Thompson. This is little Evan's mother. When were you told he was found?

THOMPSON: I was here at the studio. Naomi from CNN, she called me.

GRACE: So you heard from our show that your son had been found?

You know, I don't exactly have maternal instincts, but, jeez, I might be willing to let the kid remain missing if that's the price I'd have to pay.
Posted by J at 12:54 PM

hehe she looks evil in that picture, but it's her VOICE that I can't stand. It annoys the hell out of me!

I love how everyone is guilty to her no matter what the case is the accused is guilty. No trial necessary. Next case. What a witch.