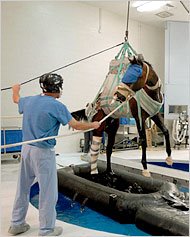 There has been an overwhelming outpouring of concern for Barbaro, the horse who broke his leg at the running of the Preakness. News organizations are following his story intently, providing minute-by-minute accounts of the attempt by vets to save the animal, and people are sending cards and gifts to his stable to...well, I'm not sure what that's supposed to do.

The chances of his recovering and not having to be killed, while better than that facing injured horses in times past, are still iffy. The Times says: His odds of survival, put at 50-50 by the veterinarian who operated on him, are far better than those of horses with similar injuries in decades past. In 1975, the unbeaten filly Ruffian was euthanized after being injured at Belmont Park in a match race against Foolish Pleasure.

Anyway, I guess I'm glad there is such an outpouring of concern from the public, but I have to say, it's a very selective concern. There are animals in dire straits every day, including plenty of horses. I'm on the Humane Society mailing list, and every week or so I get an email from them urging action to help save wild horses in the West who are being rounded up and slaughtered by the government or by ranchers. And, of course, every day in this country, thousands upon thousands of dogs and cats are put to death, unwanted and unloved, abandoned by owners.

Why does an animal have to be “famous” to get such interest as Barbaro is getting?

Well, at least there is concern, and, at least as a society, we have somewhat progressed to the point where there are laws against animal cruelty. And even though it still happens in secret, at least we and the civilized world have officially banned such inhumane games as dog fighting and cock fighting and the like. Hell, they used to do bear baiting and “games" involving animals that can't even be described they were so cruel.

But, every day, to amuse man, or make him money, Barbaro, and other horses, are put at risk for the “sport” of racing. We only hear about the famous races, the Preakness, the Derby, and the like, but horse racing goes on every single day. And we have to ask what are we doing to these creatures?

When a race car driver gets behind the wheel on a track, he puts his life at risk - but he has a choice in the matter. He knows what the risks are, and he choses to do it. No one is forcing him. Race horses don't have that luxury.

I know we've had the so-called sport of kings with us for centuries, and there likely always will be horse racing, it's not getting banned any time soon. And, sure, the horses seem relatively well treated and healthy, and they no doubt have better lives than those poor horses I see attached to a carriage and pulling some fat goober from Iowa around Central Park in the middle of a sweltering Manhattan summer day. But we should still ask how much is it worth putting these race horses' lives at risk to give us pleasure?
Posted by J at 11:35 AM

That poor horse. I''m glad he's getting the care he's gettng, but you're right there are plenty of other horses and animals in worse condition too that shouldn't be ignored!

I was watching the race at a bar and people started gasping and crying when they said what had happened. I had to literally turn away in case I saw something horrible. Now I feel sort of guilty about watching these races once in a while.

dont you find it odd that people selectively care about some animals well being but not others? why would you care about any horses wellfare jbk when you regularly speak of eating other animals that suffered horribly their entire lives? it makes no sense to me to eat a cow, chicken or pig but love a horse and think that its somehow disgusting, wrong or different. i just dont get it.

veganerd, people have to eat, but they don't have to watch horses racing

who said not to eat?

Well people are raised in this country and most others I suppose eating meat. It's a hard habit to break. But there is no excuse for putting animals at risk just for our amusement with things like horse racing or greyhound racing or siteseeing carriages, etc.

veganerd, I totally get the hypocrisy factor, and I've recognized it and commented on it myself in some previous posts, where I've waxed lyrical about animals, who I really do love, then said, "Well I'm off to have a burger now." What can I say. I've not been able to wean myself off meat, and as moxie girl said, it is hard when it's just a normal fact of life and the way you are raised, as most Americans are. I lasted about a year sans meat once a few years ago, and one day I will try it again. I have a few friends who are vegetarians and I admire them for it, as long as they don't get too preachy (although they are a pain in the ass at restaurants:) In the meantime, I still maintain the right to decry the way we treat animals on a daily basis, horses included, even when I have a filet mignon once in a while.

I'd like to give up meat too but the alternative choices are not very appetizing. I think more people would give up meat Veganerd, or at least try to, if they had better options to cook at home or more choices available in resturants to order...

veganerd your first comment doesn't even make sense, or at least is arguing about something that wasn't in dispute. jbk's original post was ABOUT the selective concern for famous animals, compared to the usual lack of concern we show about most other animals on a daily basis.

well jbk at least youre aware of it unlike most people it seems. its a start. good luck with your future vegginess.

hey pebbles yes it did make sense. maybe you didnt get it but it seems everyone else does. yes it was about selective concern and i pointed out that he exercises the same sort of selective concern in other ways.

When you look at both the health concerns and the issue of immmorality to animals there shouldn't even be a debate about eating meat or not, but that's a fact of life in the Western World. You never know how to appeal to people, Veganerd, at least I don't - whether to tout the health benefits of giving up meat, or the conscience benefits of not contributing to the slaughterhouses and chicken factories, etc. You just have to keep chipping away and eventually more people will come to our side.

Hmm I love the idea behind this website, very unique.
»

Hmm I love the idea behind this website, very unique.
»