Every so often you hear people excitedly say that Rudy Giuliani, the former mayor of this burg, is going to be running for the Republican nomination for president in the 2008 elections.

There's yet another story speculating about just such an event in the Times today.

And folks get all excited. Oh, they love Rudy, they love how he responded on 9-11. "America's Mayor" he is sometimes called. Giuliani is traveling the country now, fund-raising for Republican candidates, which could give him some chits to call in if he does run.

But, I have to ask - are these people who think this is really going to happen nuts?

I don't care how well Rudy performed on 9-11 - and, sure, he did great on that terrible day. It was his finest hour. He showed compassion and resolve, and was a calming presence on the scene and on our TV sets in those confusing hours and days after the terror attack.

But let's also be honest about it: he simply did what any competent leader would have done. Try to calm the populace and prepare them for the horrible news that was coming out. He gets such high marks because our exalted President was cowering in a bunker in Nebraska, and when W. 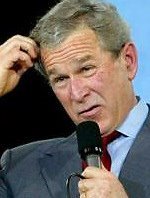 finally emerged and spoke on TV, he looked like the scared little empty suit he is. So, yes, compared to Commander Bunny Pants, Rudy did magnificently.

But I digress. These people talking up Rudy are delusional. Do they honestly think that today's Republican party, controlled by the religious right, and conservative southerners, is going to nominate a guy who is pro-choice, pro-gay rights and pro-gun control.

A guy who has a penchant for dressing in drag (he's done it a few times at those annual press dinners the NYC media holds, and even on a Saturday Night Live skit.

A guy who is on his third wife. (And, by the way, announced he was divorcing his second wife, Donna Hanover, during a live TV press conference, which is how she found out about it. And, for added bonus points, when she threw him out of Gracie Mansion, he stayed in the apartment of a gay couple he is friends with).

Now, don't get me wrong. I love his positions on the social issues. He is basically what is called a RINO (Republican in Name Only) and he is one of the few Republicans I have ever voted for in my life.

But, seriously, do these people talking up his chances for the GOP nomination honestly believe that the party of James Dobson and Jerry Falwell and Pat Robertson would permit Rudy Giuliani to get on the ticket? Not a chance.
Posted by J at 12:06 PM

Rudys the man, but yup theres no way the rednecks in Arkansas and Miss. are going to vote for him!

it's a sad commentary on the state of the Republicans today that Rudy wouldnt be able to get the nomination.

Anonymous said...
This comment has been removed by a blog administrator.
10:12 PM